So, this may well end up reading like an ad for WOW saddles, but after today I thought it would be nice to show the changes in Assegai over the past three years. The WOW dressage saddle I bought two years ago has contributed in no small part to these changes and are worth revisiting.

When I got Assegai, he looked like this, a green broken 3 year old: 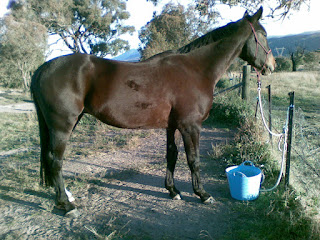 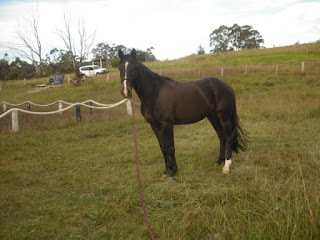 As you can see, he's low on muscle and has obvious deep wither pockets and no topline. He became increasingly aggressive over the first twelve months, a combination of pain caused by an ill-fitting saddle, chronic pain from injuries in the paddock before I got him and a sensitive soul. At least, that's my reading of the situation.

Age, work and a fair layer of fat have made him look like this: 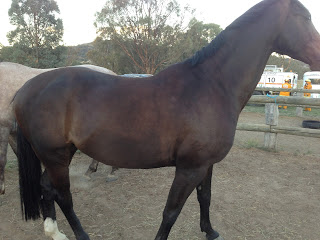 The WOW saddle, and a beautifully fitting Pessoa jump saddle (couldn't afford two WOW saddles!) have made a huge difference to Assegai's topline, contentedness and in some way to his development and training. From the first fitting, Assegai started lifting more through his back, going forward more willingly, just trying more.

It has been frustrating - Assegai has got to be the touchiest horse going - but today was breakthrough day. As Assegai has changed shape, grown bigger and stronger, he's needed re-fit after re-fit, as I posted about earlier. Today, Julia brought her A game. :)

Two things have made a massive difference. The first was a slight change in panels. The old panels had a gap at the top, the part that forms the channel of the saddle. And this is supposed to allow more room for the musculature to move under the saddle. But for Assegai this appears to have been uncomfortable, as the Julia fitted panels that formed a snugger fit in his wither pockets. Because the pommel articulates the panels should fit quite closely.

The second change is the purchase of one of the H-girths from the WOW range. I think this has been the greatest change to date. The girth is made of two narrow padded leather straps connect on the sternum by a connector strap. The idea, from memory, is that the girth sits either side of the pectoral muscle, preventing pinching and discomforat and allowing the horse to use those muscles.

As soon as we started walking, Assegai wanted to stretch out and down, but not drop his back like usual....he went forward into trot without raising his head, happily blowing and staying on the bit. It felt amazing. He even pulled a pretty hot medium trot out of the bag!

So, I actually feel a bit excited. I've got an Official dressage comp coming up in a few weeks so I'm really interested to see what he can do. Gotta say, the WOW is probably the best investment I've made in my riding. Starting to save up for one for Rose. :)

Thanks for your comment! I'll approve it as soon as I can....unless you're a spammer, in which case, don't bother!